good thing to do #2: make an old-school visitor board

I found this idea so damn cute: a collage of Polaroid pics of all the visitors to your flat/house. A Who’s Who visual compendium of Folk Worthy of Being In Your Intimate Space. 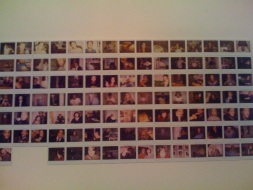 It’s a bit like those walls at the back of Italian restaurants where they get famous people to sign pictures of themselves (strangely they’re mostly soap stars from the 80s you’ve never heard of, but who definitely have an AURA about them).

My friend Rob welcomes visitors to his swanky apartment by flash-bulbing them in the face with a dusty old Polaroid camera. After the picture slides out and the  color fades in he staples it to a foam board in his front hallway. Over time he’s created a giant collage presumably titled Anybody Who’s Ever Visited Me and turned a blank white wall into an artsy conversation piece.