sunday life: in which I try out "whimsy" for size

This week I sleep at the wrong end of my bed. 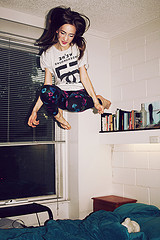 Lately I’ve been exploring whimsy (see my previous post). A little bit because I just like the word. It has a lovely onomatopoeic trill to it. It’s also a theme that’s been popping up a lot this past week, which is what themes do when I’m looking for a new topic for this column. When they erupt in clusters I’m compelled to write about them, somewhat whimsically. Or perhaps just superstitiously.

First, I met this guy down the street who’d stuck eight cameras together and had devised a button that could press them simultaneously. Just to see what happened. He was taking photos of twigs when I came across him.

And then I got a feed from 13-year-old fashion blogger Tavi Gevinson. I’ve followed Tavi for 18 months. Her “about me” blurb reads: “I take part in a rap group with a pirate, and we write about Japanese designers and furry vests”. Her posts see her variously dressed up in a piece of carpet netting with a blue fruit basket attached at the hip, and four clashing tartan pieces (one on each limb) worn with floral Doc Martens.

She’s now sartorial royalty. She’s been on the cover of fashion bible Pop and sat front row at New York Fashion Week last month. She posts: “For one week I was in a utopia full of people who can recognize that my jacket is Luella and appreciate that I stuck an upside-down doll in its chest pocket.” Off-the-dial whimsy in a four-foot-nothing package. I want to hug her!

Whimsical people do whimsical things merely to see what happens. And because it feels nice doing it. They create music and art and things that are neither art or music, nor anything in particular. It’s just whimsy. Or curiosity writ large.

My friend Rosie is whimsical. She’s an evolutionary biologist who always wears a straw hat with flowers and red lip liner when she studies the mating patterns of African mole rats. And grows watermelons and bakes cakes at 3am. “Whimsy,” she says when I call her back to earth, “is being caught up by the thingness of things, the peculiarity of the particular.”

It’s also spontaneous and has no purpose, no end-point, she says. And herein lies the lovely rub: whimsy drags us from our purpose-mad existence, it presses “pause” long enough for us to get a taste of life lived in “the now” and free-fall for a bit. When there’s no discernable outcome to be achieved, there’s no disappointment or timeline. It’s just playful, right now.

Lately I’ve effused as much whimsy as a manila folder. I’ve been in a purposeful rut. Even the more playful bits of my life have a pragmatic point. I listen to music radio to stay abreast of pop culture, not for the joy of it; my morning beach walk has become a habitual fitness regime. I know many of you feel the same. As my mate Rachel says, “Even getting a massage is a chore – booked in at the same time each week, so that I feel like I’ve ticked off “me time” on my list.”

Innovation consultant Chris Barez-Brown writes in How to Have Kick-Ass Ideas that ruts are best broken with small moments in whimsy, not seismic changes in behaviour. Counting men with moustaches on the way to the bus stop, or sleeping at the wrong end of the bed is enough to shift perspective, he says. The little shifts add up and steer things in fresher directions. This sprinkling of small change, delicately and incrementally, is gaining momentum in happiness theory circles. I rather like it.

And so it was on Wednesday I sleep wrong way around.  It felt odd, but the world did seem different when I woke, and that was enough for me to start my day a little left of centre of my rut.  The effect dominoed. I ate frozen peas and haloumi for breakfast. Just because. And hung the paintings in my lounge upside-down To see if I liked it like that. And for a moment I forgot what I was meant to be doing and free-fell.

PS. no info sharing, no spam, promise.
You might also like…
and so it was that i giggled with the Dalai Lama November 30, 2009 sunday life