sunday life: in which I quit the sunday afternoon email catch-up habit

This week I reclaim my Sunday 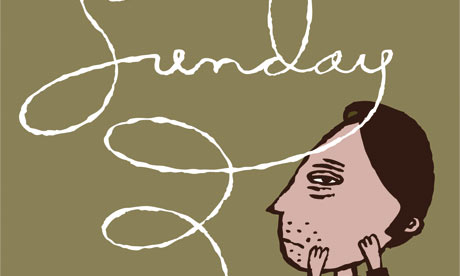 Sundays are sad. So says a Swedish study just out. It found the Sabbath the most depressing day of the week because (and I just love how big, important studies have an uncanny knack for pointing out the bleeding obvious) it’s the day before school and work starts. It also found the mood plunge is particularly profound among married couples and East Germans. (I could venture a theory on this, but I fear it’d only make things bleaker.)

Me, I’ve often found Sundays mood-sinky. When I was a kid, they were Dickensian-grim. As the sun set and the dam snap-froze over for the night, Dad would haul me and my brothers out to the back paddocks to chop wood for the week. Then Mum would line us up on the verandah to scrub knees and cut toenails. We’d catch the last bit of The Wonderful World of Disney before dinner. Then bed, the dread of first period clinging to us, prickly and restrictive like a Fair-Isle jumper in the rain.

As adults, you’d think we’d find a way to address this. To make Sundays sunnier. I know some people head to the pub on Sunday nights by way of a final hoorah to the weekend. This was a fad for a while and I hear it put off the inevitable quite effectively.

But I’ve noticed more recently that Sundays have taken on a panicky, catch-up quality. There’s not enough time in the week to get everything done. Certain tasks – wading through long emails, finishing that advisory report, filling out health insurance forms  – can’t get done in the Monday-Friday flurry. So we set aside “just a few hours” on Sunday afternoon to “get on top of things”. It started as an occasional practice. But now, we can’t get through the week without a Sunday session of ploughing through our inboxes and that stack of background reading next to the couch.

Some time between the Reformation and the advent of MacBook Airs Sundays became a depository for the week’s backlog. A bilge for our bulging commitments. We know life shouldn’t be like this. There should be parameters. Our partners and children resent it. We resent it. And so Sundays have become even sadder because they’re a reminder of all this.

OK, we need a mood shift. Another study, this time by National Geographic explorer Dan Buettner and detailed on TED.com* last month, has found a long and healthy life can be boiled down to nine stupidly simple factors. One of which is taking a day out each week to switch off. Buettner’s research surveyed the Blue Zones (places in the world where folk live longer than average) and found a day of complete rest added years to life expectancy. In days past it was called observing the Sabbath and it entailed full shutdown – no shopping, no errands, no updating Twitter.

I’m not religious, but I decided this week there’s divine logic in “observing a Sabbath”. Actually, let’s break this down. The invitation here is to mindfully witness a day that, by biblical definition, is the first day of the week. So it’s about setting aside 24 hours to lay out a considered launching pad and choosing the tone for what lies ahead. As they say, how you start something is how you finish it.

For the past few weeks, I’ve been observing restful Sundays. It took some hefty erecting of parameters. I turned down a trip to Byron Bay with a big group of friends. I shut the door to my study as a symbolic gesture. And I left my diary in the car to stop myself from doing a bit of scheduling in front of The Good Wife before bed. It took effort. And the floaty feel of the day – I banished all plans and commitments, too – left me feeling a little naked. But I’m getting the hang of it now and my Mondays have been kicking off right on tone. It’s made me calmer and happier.

Back in our grandparents’ day, balancing work and rest was easier – rest days were institutionalised and iphones weren’t invented. But it was only easier. Today, the difference is we have to create our own parameters. Technology – and the rest – will whip us into a frenzy. It will lure us to more “doing”. So we have to diligently carve out our rest. And erect some almighty barrier fencing around it.

* If you don’t already, subscribe to TED.com’s weekly rundown of inspiring talks posted on their site. They make life better.