Justin Bieber: close up and clear

I got close to Justine Bieber this morning. How close? This close: Close enough to get what the screaming thousands of teen girls outside the Sunrise studio (where I was filming this am) are on about. He sells happy and fresh and clarity and unadulterated. And I bought it.

That’s what happens when you’re discovered overnight and there hasn’t been enough time for your enthusiasm to be watered down. In myyyyyy daaaaaay, you had to play in the garage a few years, graduate to the pub circuit, hope a scout from Stock Aitken and Waterman passes by, negotiate a deal and get a T-shirt line printed. Then maybe get a record released in three Christmas’ time. By which time, your zeal has been zipped a little. You’re 25 and a little hardened and cynical and compromised.

Justin has bypassed this due to the wonders of the inter-web. And his energy is clear and pure as a result. I watched him calling shots with the adults around him (including his mum who looks about 17). He wanted the show to go on, despite what the police said about security issues. He wanted to shout out to the crowds outside, despite Seven security worrying the hormonal mob would smash the windows in.

All us adults watched on, astounded. How amazing would it be to push your vision as far as you could without being touched by cluttery grown-up compromise. 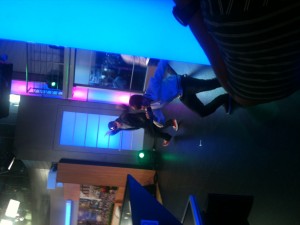 PS. no info sharing, no spam, promise.
You might also like…
Coming home to earth April 23, 2010 lifestyle