Here’s the thing about Tony Abbott, the man pitted as our next PM: he’s un-pin-downable. His brazen comments about lying on The 7:30 Report a week or so ago demonstrated this. My opinion in the aftermath was that they indicated he wasn’t up for the job as leader of Australia.

And, then, yesterday, I met the guy. He was “in conversation” with the ABC’s brilliant journo Annabel Crabb at Sydney’s Writer’s Festival. He was quite restrained yesterday. No royal gaffs. Although he did mention that he subscribed to the idea of “asking for forgiveness, rather than asking for permission” . Which is a mantra Kerry Packer used to work to. When I worked for Packer, this maverick approach was certainly how things got done – you went ahead and did bold things and dealt with the fallout later. I loved working this way, because it meant you could take risks (you just weren’t allowed to f*ck up). Things got done in fresh, untainted ways… at least some of the time.

But, I ask again, is this maverick approach how the (potential) leader of a nation should operate? Shouldn’t a leader always seek permission from their constituents?

Anyway, I digress slightly. Because the THING I’m stuck on is the broader idea of AUTHENTICITY. Abbott is, without at doubt , the most authentic public figure the nation (the world?) has encountered. And we don’t quite know what to do with it, do we? I mean, what box do we stick it in?

He shoots compulsively from the hip. It’s like a tick; he can’t help it. He’s aware of it, laughs at it; but has to keep going there anyway. He announces he’s the idealogical love child of Bron Bishop and John Howard…who does that?? He over-shares. And he acknowledges his foibles. Yesterday he acknowledged that he’s far less judgmental about life than when he was in the priesthood. I believe him.

Yesterday he cracked jokes backstage. Took the piss out of himself. He’s a cad. He’s extremely likable. He radiates human-ness and a genuine desire to flirt with life. It caught me off-guard. I vote to the left. I abhor many of his personal views and policy initiatives. But I found myself wanting to sit next to him on a plane. Or inviting him to a dinner party. It threw me.

I was awake for hours last night thinking about this. My thoughts: Abbott is a man who has to live on the brink. He teeters there always, alive to the breezes, the depths, the risk. He entered the priesthood looking for the answers that those who live on the brink are always seeking. Then journalism. And then politics. He does extreme sports and seeks out extreme ways to connect with humanity (I see his community involvement with the bushfire service an illo of this).

There are men close to me in my life who are like this. I know their type.

People on the brink NEED to push boundaries. They need to reach out and prod and poke and unsettle the waters. Brink dwellers would fall off the edge if they had to be restrained, they’d submerge into blah-ness. Brink dwellers also fascinate and scare the rest of us. In part cos we don’t know what they’ll do next. But in part because they force us to question the role of authenticity in our lives. These people are really important to life, I think.

The notoriously left-leaning press gallery love Abbott. Adore him. And very much dislike Rudd (we’re going to see a lot more of this emerge in coming weeks….). Abbott might just change the face of politics. He’s such a breath of fresh air, especially when posited in contrast to Rudd. Women, in particular, love his openness. And, indeed, he’s surrounded by female staff, daughters and sisters. I’m the 4987r9487th female journo to be disarmed by his charm, so I’m told. I was even warned that I would be.

But, again, is this what a leader is meant to be doing? Is their authenticity more important than the values that their authenticity exposes? We know where we stand with Abbott, yes. But is this a good place to stand? My personal take is no.

It is tempting to want to reward the authenticity, to encourage it with our vote. I know I don’t want Abbott’s honesty to disappear from the public arena. It needs to be fleshed out further, encouraged, explored. Although it unsettles me to admit this. The group of journalists I was with yesterday circled this issue for hours.

It’s such an interesting debate to be having right now. We’ll all need to have an opinion on it. Perhaps, at the very least, it will force Labor (and the rest) to confront their own (lack of) authenticity? And force other changes, too? Such as….oooooohhhh… pushing Julia Gilliard forward to replace Rudd!!!?

We get the leaders we deserve. I think we deserve to explore authenticity right now. We must. But I don’t necessarily think Abbott needs to be PM to do this. His impact can be made from where he is.

And as a reminder of how far we’ve come… 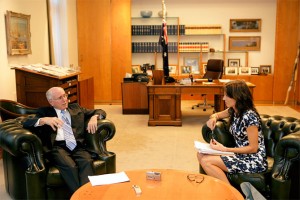 You might also like…
a secret little gizmo (and guess who I had lunch with today?) May 21, 2010 lifestyle