Sunday life: a cup of tea with Edward do Bono (tell me your take on this one...!)

This week I meet Edward de Bono, the world’s most well-known thinker.

So, it’s arranged we meet at an outdoor swimming pool on Friday morning. Which is a little odd. Edward De Bono, the world’s greatest thinker, is 75 and arrives with his aide, wearing a full suit and a superbly garish tie. He’s not here to swim. Odder still, he kicks off by grabbing my hand, leaning in close and telling me a really, really terrible… penis joke. The kind your Uncle Kevin tells at Christmas. He then suggests I marry a 6’4” Ugandan basketball player. Which, according to his aide, is what he tells all the girls.

Admittedly the penis joke loosely segued to the theme of happiness. Which is why we’re sitting poolside on a Friday. De Bono’s in Australia to talk at the Happiness & It’s Causes conference this week about how thinking makes life better. Me, I’m enduring penis jokes to ask, how so?

So we move on. And I put the inappropriateness down to a brilliant mind that runs out of avenues for its outpourings. Or a “provocation”, a De Bono concept describing a controversial idea you intentionally drop into a scenario to shift perspective. I can be generous like that.

De Bono is not a man to shoot the breeze. Barely pausing to let go of my hand, he rattles off what seems like four decades of theories on how to think outside boxes. He talks in anecdotes, using his own patented terms (Pos, PMIs, H+) and colossal achievements (three states in the US use his “Six Hats” theory in their jury systems; every kid in Venezuela is taught according to his “CoRT” methods) to make his points.

It’s fun. It’s fast. We talk in riddles. It’s the cerebral version of an It’s A Knockout obstacle course. Our problem, says De Bono, is we get stuck on dominant ideas. A man is tired of opening the door every time his cat wants to come inside. So he cuts a flap in the door large enough for the cat to pass through. The cat then has a kitten. What’s he do? Well, he’s so stuck on the brilliance of his flap idea, he cuts a smaller one next to it for the kitten. Der, hey!

To think creatively, he says, we must shift perspective and come at the problem upside down, back-to-front…whatever it takes. To do this he proposes scores of techniques for lateral thinking (De Bono, of course, coined the term back in 1967). How do you get a polluting factory to be eco-responsible? Legislate that any factory built on a river must have its inlet (taking in of water) downstream of its own outlet (effluent), an edict that’s now applied across parts of Europe. 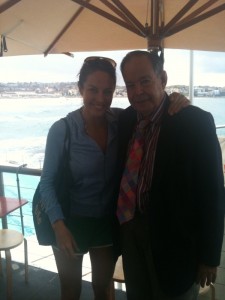 It’s easy to get whipped up in De Bono’s rapid-fire logic. I did. He stresses thinking needs to be practiced. So I spent the week in the scary world of online lateral thinking puzzles. Right now it’s 4.14pm and I have spent the entire day solving problems, like this one: A man walks into a bar and asks the publican for a glass of water. The publican pulls out a gun and points it at him. The man says thank you and walks out. Why?”* I even find myself suggesting to a friend we start a think club. Pizza and nine-dot brain teasers on a Tuesday night anyone?

But my question remains. Does all this dogma and stringent application of techniques and acronyms make life better? So much prescribed, didactic data grates with my intuitive sense that life is meant to be more… flowy.

Staggeringly, De Bono’s written more than 80 books full of this stuff. Some of them he churned out in a week; he wrote one on a plane trip. Dare I suggest it, but could this churning of information be a dominant idea that this great mind has become attached to? Just a provocation, perhaps.

I can safely say this week I looked at this issue from a lot of different angles (even from under my desk where I had to retreat after too many lateral puzzles). Then I remembered something De Bono said, an idea that forms the theme of his next book: don’t think to find truth. This is the old way, the way of logic. We’ve been raised, he says, to think in order to “hurry up and find an answer”. Instead, thinking should be about being open and random and exploring possibilities. It’s the process that matters. And from it, value – not answers – emerge. Which is not odd at all.

* Because the man has the hiccups!