I don’t usually comment on nasty stuff in the media. It’s usually best left to fester without further stoking. But I feel compelled this time. Because it’s an example of something that’s been bothering me for ages.

Snark. I really don’t like it. Gawker started this bitchy style of commentary. Perez Hilton perfected it. And bloggers and tweeters have tried to emulate it. 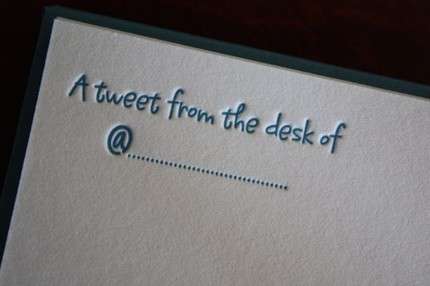 Snark has become a “voice” that many people find comfortable to slip into. It’s easy to replicate. Just look down your nose and spew forth. It’s mistaken for critical thinking. It’s not. Critical thinking is productive. Snark separates you from me. It creates distance, which is destructive. It makes none of us happy. It’s human behaviour at it’s most base and fearful. Which is so disappointing.

Snark is not hate speech. It’s more cowardly. And it attacks individuals on personal fronts. See this New York Times article on snark for more.

And note: the great writers and reviewers don’t stoop to snark. They don’t need to or wish to. Their aim is to share and connect, ultimately.

I rant, of course, following the attention Wil Anderson and Catherine Deveny’s Logie tweets have attracted. It’s just been announced Catherine’s been dumped from The Age (their words, not mine) for her contributions. Both are very talented artists. But they both spent Logies night emitting cruel comments on Twitter. It was an avalanche of snark. On Sunday night I observed it for about 15 minutes. I actually unfollowed Wil after last year’s Logies when he slaughtered Gretel Killeen by Twitter. It was horrible and unnecessary. Ditto Catherine a while back – her tweets were too aggressive. I also cancelled my Gawker subscription for the same reason. Negative energy spreads. You are who you hang around with and what you read and what you absorb.

But I was forwarded one of Wil’s:

I wasn’t upset for myself. I quit MasterChef (I was contracted for three series) because the role was not something I wanted to continue in. And left amicably. There is no issue here. For me.  And, yep, I was working that night.

No, I was upset because snark is so wrong and unhelpful and fearful and sad. 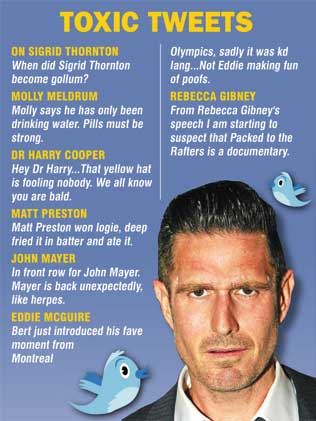 – Andrew Lehmo tweeted this: I can’t believe reaction to @Wil_Anderson #logies tweets. can’t we laugh anymore? ps it’s twitter not sky writing. you dont have to read it.

Not true. People like Wil accumulate followers because it helps them sell their show tickets or books or whatever. All good. They work hard to attract a following. Wil has 35K+ followers. A big audience. Sure, they opt in. But they’ve been invited there… lured by his fame. They want to be part of his inner circle. It’s not like following a stranger. Wil has influence. Once in his circle, followers get tweets from Wil, whether they like them or not.

Further, Tweets hang around for ever, unlike a sky written message. And they’re passed on. And, when they come from someone influential with whom you feel you have an intimate connection with, then the message is far more potent than a message from some faceless marketing company you don’t care about.

– Many have said Wil is a comedian who is allowed to say such things. I’d argue that Wil is a public figure working in an industry that is volatile, precarious, full of fragile egos and that is tough to withstand. I can tell you – TV is a vexed industry. I didn’t think it could be worse than magazines. It is. It batters even the most robust characters. And everyone in the industry knows this. We know how bad it can get. Which is why I truly think industry insiders should not drag each other down. But should actually make an effort to shift the energy. We owe it to each other.

What’s more, Wil’s attacks were personal, not professional. Most of them were about people’s appearance. Low!! When you’re in the public eye, this kind of bludgeoning is friggen hard to take. You’re already out on the furthest limb of the branch, available for all kinds of batterings. It’s one thing to be bagged for being a bad actor, or saying something dumb to a New Idea journo. It’s another to be torn down for your body weight.

– My rant too Pollyanna for you? OK, what about this: Wil should use his wit and smarts for good, not negative, bile-dredging, easy snark. It reflects 100% on him that he chooses to descend into snark when clearly he’s bright enough to buck such a rut.

Which is a nice way to end things.

PS. no info sharing, no spam, promise.
You might also like…
how conservative are you? (a fun test) May 4, 2010 deep thinks