sunday life: the beauty of queuing in New York

This week I queue in New York*

(You might want to play this while you read!)

My Friday went like this: ensconced in a blunt, jet-lagged haze I wound my way through Manhattan’s Central Park to the Museum of Modern Art on 53rd. , whereupon I queued for five hours to sit opposite performance artist Marina Abramović. And stare at her.

This Friday marked Abramović’s 72nd full day of sitting and staring at strangers, one at a time, not moving even to eat or wee. In total, 1500 New Yorkers have queued – most of them from 4am – for this peculiar experience. Including, yes, Bjork. Marina is the one in white, below. Stacks of people cried, by the way. It was a big, beautiful experience to be in the room. 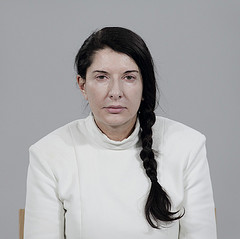 Eventually I gave up on the staring queue and moved to another exhibit where two naked artists stood facing each other, 30cm apart. I joined another long queue to walk awkwardly between them. The sensation of fleshy boobs and flaccid testicles brushing my bare limbs as I squirmed past was wholly unsettling. As art, they say, should be.

Finally I hoofed over to the behemoth Wholefoods supermarket at Colombus, a veritable zoo of anthropological anomalies and confused American dietary backlash, and found – amid the organic sprouts and daikon – six emu eggs for sale.  I didn’t ask, “who the hell buys six emu eggs on a Friday?”. Because, hey, I was in New York.

Now, you might wonder how a trip to the busiest, noisiest ghetto of neurotic humanity in the western world fits into my weekly search for a better life. Well, you’d be surprised.

Let’s start with the emu eggs. There’s nothing you can’t buy in this town. As my friend Kersti says, “In New York you can order a warm cadaver”.  And, as Jay Z and Alicia sing, “There’s nothing you can’t do, now you’re in Neeeew Yorrrk”. You can attend Mostly Vegan Cherry Blossom Bento Box making workshops ($US110) or build a bamboo bike ($US932).

I come to New York every 18 months for work and each time I cross paths with someone of note. It just happens here. Janeane Garofalo and I shared hair frizz tips in a West Village cafe once. I told a guy I’d been chatting to in a bar for an hour he looked like a short Cuba Gooding Jnr. “That’s because I am Cuba Gooding Jnr,” he replied.

But this is the thing: in spite of all the mind-boggling options, Manhattanites mostly derive pleasure from brazenly not attending to them. At least not all at once. New Yorker film critic David Denby this week wrote that in the Manhattan genre of film “not much happens”. I agree. This is the appeal of Woody Allen’s stuff. And the recent New York I Love You.

Ditto with TV’s Seinfeld. It’s the same in everyday life. There are emu eggs out there to buy, but the best stories happen over a pastrami sandwich in a daggy diner. Or on the subway. Or on your stoop. In essence, there’s a focused appreciation for the minutiae of life, for the real moments that happen between people. Options are narrowed (mostly because you have to, to survive the onslaught of choice) and intimate neighbourhoods form (mostly because everyone lives on top of each other, not spread out over suburbs).

This intimacy plays out in the press daily. Big news stories can be happening out there. But the most popular New York Times story of the day will be a 3000-word treatise on the dude who changes the light bulbs at Grand Central – what he eats for breakfast, how he spends weekends. In today’s paper there’s a feature story on two misfits who play ping-pong together. No exciting news angle. Just a quaint friendship dissected over 747 words. Bizarre. But it’s this kind of parochialism that sees me coming back.

But back to the queuing. Manhattanites are notorious for loving a queue. There are 18,696 eateries across the island, but locals queued for hours at the infamous Magnolia Bakery in West Village when it first opened. In the snow. For a damn cupcake. The queue for Shakespeare in the Park tickets each summer have become their own little subculture. People sit in a line all day, making friends and sharing their picnic with strangers, even though there are countless ways you can see live theatre in this city.

Sitting in the staring queue this week I realized this is how New York makes life better.  Why do New Yorkers queue when there are countless other options to be experienced? Because queuing is about being a part of a something. Which is a reminder to us all that beyond the frenzy and excitement of life, mostly we all yearn for realness and intimacy and simplicity.

We all yearn to belong. I tend to find this comforting and exhilarating all at once.

* I got back from New York 2 weeks ago…yes, it takes a while for my column to get published and printed. So you know, I write the column “live”.

PS. no info sharing, no spam, promise.
You might also like…
sunday life: to finish or to abort? June 13, 2010 sunday life