sunday life: to finish or to abort?

This week I annihilate my unfinished tasks 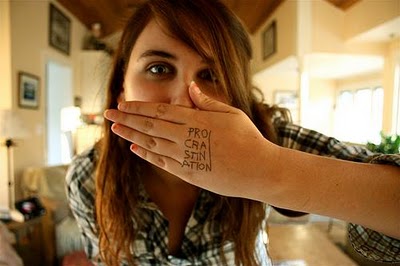 I call it the Un-Albumed Photo Problem. In households around the world, shoved at the back of some cupboard, is a box of old photos with negatives that have come loose from the packet. This box elicits much guilt. It probably hasn’t been touched in years; I mean, who gets photos printed these days? But rarely does a week go by when someone in said household doesn’t say to themselves, “I really should put those photos in albums”.  I had dinner this week with a frazzled TV executive toying with taking extended leave so she can regain control of her life. “If I could just get time to put the baby photos in albums,” she said. “That’s all I need.” The “baby”, by the way, is now 18.

It’s like the Un-Albumed Photo Problem is a barometer of our chaos and a measure of how long it’s gone on for. How many years have yours remained un-albumed? 18? 25? Wow, your life is seriously outta control!

Now your unfinished project might not be a flotsam of photos. Maybe it’s IKEA shelving that you’ve been “meaning to” wall-mount since last Christmas. Or a beef bourguignon you’ve been “meaning to” make – you’ve bought all the ingredients and they’ve been sitting in the freezer for three months. It haunts you with it’s unfinishedness. It makes you cringe when you think of it. And so it lingers longer.

I know this is a global problem because productivity and happiness experts around the world have suddenly taken an interest, frothing forth five-point fixes on blogs such as Unclutterer, GettingThingsDone and Zen Habits. To summarise for you, there are two schools of thought. The first says when confronted with a pesky unfinished task, just do it.  And get over it. Shut down distractions, set aside time, do the most hideous task first and don’t budge until the last screw has been allen-keyed into the wall. To date, this has been the predominant vibe: geeing up frazzled folk to get more done faster.

The other, more contemporary school, however, says, don’t do it. That is, strike the task off your to-do list once and for all. Advocates of this unfinished task annihilation encourage being mercenary and deleting one commitment every day. Doing so forces you to get clear on what actually needs to get done and what doesn’t. Often an unfinished task has become redundant.  We don’t realise this until we sit down with a red marker pen and think about it.

As I’m a neurotic doer, I work to a well-oiled to-do list. Each week I write a new one, transferring undone items from the last list to the new one.  Some items can carry over from list to list for six months, unexamined. I’ve also got a basket in my study of warranty certificates I haven’t filled in and bits of plastic that need to be araldited that instills panic in me every time I pass it. Which is ludicrous. How ludicrous?

Well this week I committed to striking one thing off my to-do list and from my little basket of guilt every day. This is what I uncovered: two warranties that had expired anyway, busted headphones I’d been “meaning to” send in for repair from an iphone I’d lost anyway, a reminder to follow up a business opportunity I realised – once I paused to reflect – I didn’t want to be a part of and a reminder to hand-make a get well card for Great Aunty Eileen. And this is the horrible bit: Aunty Eilleen died two weeks ago.

Unfinished task annihilation proved to be extremely productive for me. It freed me up to do the things that mattered, dump the stuff that didn’t and extinguished the paralysing guilt that stopped me being wise enough to know the difference and from being real. I didn’t have to hand-make a card; I could’ve just written a kind note to Aunty Eilleen, or called her. It also reminded me of the ironic productivity of doing nothing. When you do nothing, things mostly unfold as they need to. When you don’t follow up something, if it’s important enough it will track you down. Those photos? They can probably stay in a box until you find yourself wanting to peruse them. As many a Buddhist will tell you, a flower doesn’t have to remind itself to bloom, or find a more efficient way for it to do. It just happens.