so, i think you should ride a bike

I’ve been thinking for a while that I should be putting some energy to inspiring as many people as possible to ride a bike. I’m not sure how I’ll do this yet, but let’s make it a campaign.

Let’s call it A Campaign to Ride A Bike (unless anyone out there would like to pose a better name?). And as our mantra we can defer to HG Wells:

“Every time I see an adult on a bicycle, I no longer despair for the future of the human race.” It won’t be a dorky campaign. Just the stuff that might get more people fired up and informed to buy/dig out a bike and get moving.

To start with a bit of an explainer about why I care about this issue:

* Riding makes you happy: I’ve ridden a bike since I was four and I believe this to be totally true. I started out BMX racing and, then, got my first mountainbike at 11. I’ve done downhill racing and 24-hour mountainbike races. I’ve toured around the world and pretty much every major holiday has been on a bike (Vietnam, Tasmania, California, Spain, New Zealand… I once rode Brisbane to Cairns just to kill some time). You see things on a bike. You smell things. It’s free and flowing and honest. Your skin glows on arrival. You have time to think. You can swoop through traffic. You’re alive to things, not a passive, dull passenger.

* Riding is more efficient: I’ve only owned a car for five years of my life (on and off). I generally get to a point in owning a car where I realise I prefer riding a bike, mostly because it is the simplest way to move around. It’s cheap, faster than a car (if you live in a big city, I swear it is) and it cuts out parking tickets. It’s also door-to-door and you can estimate travel times far more accurately.

* It’s the future of our cities. If we don’t cut down on our use of cars, our cities will collapse. The SMH ran a great story on the weekend about how more people in Amsterdam cycle than drive and what impact that has had on the psyche of the city. It also raises the helmet debate…which I’ll cover in more detail later.

Going forward I’ll post some links to great sites, tips on how to juggle work clothes etc when you ride to work, where to buy hot bikes, the best places to cycle for a holiday. Anything else you’d like to know about??

In the interim…some hot shots of chicks on bikes, couresty of Cycle Chic Copenhagen and The Sartorialist,  for your viewing pleasure. Just in time for spring…to prove you can wear a frock n ride. 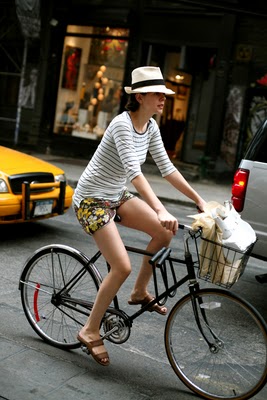