Sunday life: screw it, let's just do it... and tap-dance out of a plane with Richard Branson

This week Richard Branson tells me shows me how to jump into life. 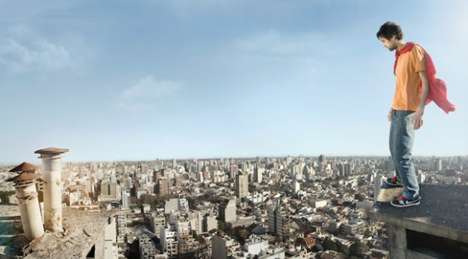 I can’t profess to know Richard Branson intimately. That said, we have shared two plane trips and a chicken sandwich together. And tap-danced, hand-in-hand, down the stairs of one of his Virgin Blue Boeing 737-800 in front of a bunch of TV cameras and journalists. Based on this I feel I can say with some (OK, shaky) authority that Sir Richard is no Anthony Robbins. He doesn’t talk in sound bites. He doesn’t do motivational bootcamps, instead requesting a Q &A format when he does find himself plonked at the front of a large auditorium. And he doesn’t look you in the eye when he talks; I’d describe him as quite shy.

Instead, what he does do – rather famously – is divert attention from this shyness by doing bodacious, OTT things – like fly a balloon around the world and jump off the Palms Casino Resort in Vegas in a dinner suit. For that particularly expectant subset of the community who flock to motivational “summits”, donning notebooks, Toastmaster memberships and bags of power within-unleashing DVDs bought at the desk on the way in, this might be disappointing to learn. But me, I find it refreshing. We expect a lot from our business entrepreneurs – spiels, chiselled jawlines and, oh yes, success secrets that come packaged in new (!) and inspiring (!) ways.

Which is like expecting barely pubescent men who herd a leather ball around an allotment of grass for a living to be mentors to our children.

Admittedly, when I meet with Sir Richard, I front up with a notebook and eagerly expect wise motivational words about overcoming fear. Since he was a teen and launched a music business from a phone booth in London, Sir Richard’s been plunging into his fear. He’s had as many setbacks as successes, but keeps plunging in. He’s now said to be worth £2.6 billion. How does the guy do it?

Indeed, he actively seeks out fearful scenarios, so that he can then choose to plunge into them. He chooses the tallest tree to climb, wobbles out to the farthest most precarious limb – where the breeze tosses you around, but where you also get the clearest view – and then jumps (while the rest of us cling to the trunk). Because if he didn’t, he wouldn’t see the forest for the tree’s foliage. Which is actually my motivational-speak spiel. Although Sir Richard does tell me it sums things up perfectly and asks if he might use it one day.

So, it’s just about saying yes, yes? Not thinking about it, just diving in? “Yes,” he says. Why? “It’s more fun to say yes.” Do you ever get scared? “Often and I’ve almost died, but I still say yes.” He tells me he came close to saying no. Once. (To diving off the Palms Casino Resort because the winds were too dangerous). But ended up saying yes anyway (and sustained injuries). So, to sum up, it’s about making things fun and saying yes? “Yes. But I have another motto: Screw it, let’s do it.” Which is also the title of his 106-page book. The book features nine “lessons in life”, the first two being “Just do it!” and “Have Fun!” (the book’s exclamation points, not mine). You get the picture.

Motivational business entrepreneurs all espouse this same message: just say yes, plunge in, do it. Feel the fear and do it anyway, or as reality TV juggernaut Mark Burnett says (by way of the title of his book) Jump In! Even If You Don’t Know How To Swim. It works because we all believe the person plunging in knows what they’re doing because they’ve said yes to it. This inspires confidence, then supportive action. Issues along the way are ironed out because everyone’s on board. The team follows the leader who says yes. Sir Richard doesn’t so much say all of this. He just does it.

Our chat fizzles out. So I mention I have a fear of performing – singing, dancing etc. He suggests, in that case, I join in him in the tapdance stunt he’s about to do for Virgin’s 10th anniversary party. Of course I say yes. So, wearing an airhostess uniform and waving a flag, with Delta Goodrem singing happy birthday next to me, I just do it. It’s not my idea of fun. But it’s fun to plunge and see what happens (exclamation point).