This week I push back 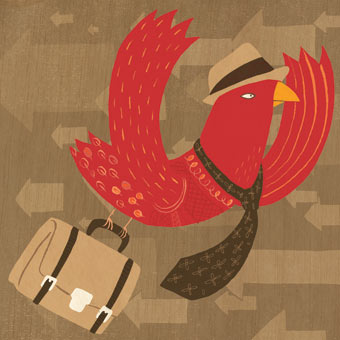 I know about a dozen people who simply don’t reply to email. I used to wonder how they got anything done, or sustained a social life. But they’re always at parties and are some of the most successful, adroit people I know.

OK, surely, then they’re in a permanent state of guilt-squirm. I mean, imagine walking around with that many unreplied emails hanging over your head! That’s a heavy karmic cloud, right there! But, nope. They’re unperturbed.

My friend James, one of the dirty dozen, says he feels justified in being so electronically AWOL “People think that because they’ve spent five seconds firing off an email asking something of me, they deserve a response that will take me 25 minutes to research and compose,” he says. “It doesn’t weigh up.”

In the past, he says, you’d have to compose a letter or pick up the phone, which required more considered application and was deserving of considered help. Which is actually a terrific point.

But isn’t he afraid important stuff won’t get done? No, he says. If it’s important to him, he does in fact reply (clearly mine rarely make the cut). If it’s more important to the other party, he says, they’ll find another way to a) get their answer or b) make it easier for him to give them their answer (eg: “Dear James, could you please advise which of these three carefully thought-out options works best?”).

Which sounds horribly selfish. But on consideration, it’s supply/demand theory applied to the time-poor economy. You want it more, you do the work.

Catching up with the Jameses of the world is bloody infuriating. But I wonder if they’re not the survivors… the post-nuclear fall-out cockroaches of this frenetic information age.

In days gone by success was a measure of how much information you could acquire. Today, an ability to block information, including emails, meeting requests, tweets, invites and news alerts, has cache. Productivity and marketing gurus I’ve spoken to, like Seth Godin, stress the value of artificially limiting exposure to information by leaving our phones at work over the weekend etc.

But does survival entail more than just stemming the tide? Isn’t it more about pushing the information and commitment back as James et al do?

This week I played with this idea. I have a friend who regularly suggests we catch up. That is, he flicks a text -“Let’s catch up”. I text, “Love to”. He replies, “Unreal, you book a place and send me a meeting request”. The earnest sucker I am, I do this only to have him tell me he’s busy that weekend. He emitted one of his “invites” again this week, but I pushed back: “Sure, I’d love to. Where and when?” This felt fair. He sought the catch-up; he can expend the energy in organizing it.

I also pushed back on various requests – to make an introduction, another to complete a quick project. “Sure,” I said. “Write up your proposal and I’ll forward it on.” In the past I’d sit on it for a week until I had time to do up the whole prop myself. So pushing back is a win-win in such an instance. (Although, interestingly, the requestee in this case went electronically AWOL once I pushed back on her.) I also deleted outright a request from a blog reader for the number of a nutritionist I use. It didn’t warrant the reply: “Try the Whitepages”.

But what about this doozy. A while ago I requested, via email, some help from Tim Ferris, author of The 4-Hour Work Week. I got an auto-reply from him saying he was away for two weeks and that if the matter was still important in a fortnight, to kindly resubmit my email then as he will be deleting all emails on his return from leave. Stunning stuff. But fair. I wanted a piece of him; the responsibility should be pushed back to me to do the follow-up.

I tried this push-back auto-reply this week for four days while I was out of the office and deleted my inbox on my return. Nothing fell apart; everything got down. But I wrestled with my guilt and fretted that it seemed arrogant. Shouldn’t we help where we can? Show we care? Well, yes.

But I ask you, how much help are we when we’re resentful and bitching about how everyone wants a piece of us and we don’t have time to get everything done? A query you may feel inclined to push back on me…no, but, seriously…what do you think?