what if i can't be the nerd anymore?

Since I was four I’ve worn glasses. Before hipsters wore glasses, being a four-eyes wasn’t cool. It wasn’t like wearing braces. You were ostracized not so much for having a defect but for looking bookish and – god forbid – intelligent. At my bogan school it was rad to be slightly dim. 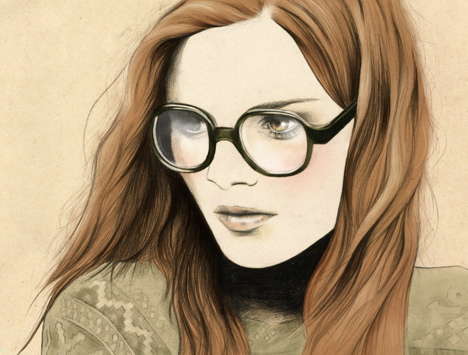 I think I became a nerd from wearing glasses. I was never bookish, but spent a lot of time on my own in the library. It meant I had plenty of time for homework. Glasses also force a certain aesthetic upon you – a slightly awkward, intense, reflective one. I’ve worn it as a guise ever since.

But yesterday I was told I didn’t need glasses. I’m affronted. Threatened. I already feel naked. My ego is attached to being different via my glasses, bold enough to wear them, not-caring-enough about what others think. I wear big, brash glasses, unapologetically. This has become my stamp.

But when German vision trainer Leo Angart visited me he took one look at my eyes and told me glasses were not required. He identified my eye issues in one glance and said  that he could fix them with simple muscular exercises in….weeks, if not days!

I’m a four-eyes because I have:

* strabismus – where the muscles in my left eye are weaker, making it turn out slightly…which is why I wore an eyepatch over my right eye when I was 11-13 years old – to strengthen the left. Strabismus affects 6-8% of us and it’s detected when we’re three. Leo reckons when undetected and untreated it accounts for a lot of dyslexia and ADD.

* near sightededness – which is why I wear glasses lenses. But Leo claims mine is so weak glasses are not required.

* astigmatism – it’s like having a stiff shoulder in my eye, which distorts the lens and makes it feel like I have a cloudy film over one eye.

All of which sounds highly dysfunctional. Except that Leo says each problem is extremely mild and should have been treated with exercises years ago. But cop this: He reckons all the issues have become a problem because I’ve worn specs for so long. Consider this: more people – esp kids – are needing glasses because we’ve trained our eyes to look at things within a metre for long periods, aka computer screens. But our eyes were designed to look to the distance – for prey, danger, food. And to move around a lot. So we’ve done to our eyes what a plaster cast does to a leg – weakens all the muscles so that you have to keep wearing the cast to stand upright…or build strength again via physio.

My glasses have acted like a computer screen or a cast. They’ve made everything flaccid and reliant.

Leo’s given me a bunch of the weirdest eye training exercises – that use a piece of string and some patterned pictures – and reckons with 90% certainty I can toss my frames. Today.

* he also suggests having walnut oil for anyone who gets dry eyes. Four tablespoons in salad etc. per day.

* when eyes get tired, press the points on the inside of the eye bone. Often the meridian is blocked and this refreshes things. He reckons that will alleviate the astigmatism.

* every 20 minutes look up from a screen for 20 seconds. We forget to blink when looking at a screen. This isn’t good. The Pomodoro Technique’s focusbooster might be good for this?

If you want to know more, Leo’s running courses from Saturday in Sydney, then Melbourne and Perth.

I’ll report back on how I go….although I’m already feeling very, very naked!

PS. no info sharing, no spam, promise.
You might also like…
how to exercise at home: a video March 4, 2011 my wellness tricks