This week I do things at the wrong time 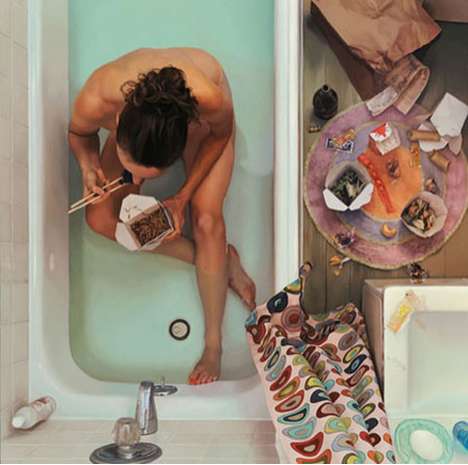 I take disproportionate delight from eating non-breakfast food at breakfast. This morning I ate mashed pumpkin with garlic. Sometimes I eat grilled sardines on lentils. Once I ate lamb chops.

In the comfortable, middle-class world I inhabit, such deviations feel like perverse acts of rebellion.  My grandmother, for 65 years, used to put out two Weet-bix in a bowl every night ready for breakfast in the morning. Bless Grandmother’s gentle soul, but my non-breakfasts say booyah to that!

Doing things at the right – or conventional – time can make sense. Turning up to weddings at the time specified by the bride and groom is always good. And getting your bikini line waxed is best done mid-afternoon, a week after your period, when the skin is least sensitive.

But this week I played with the idea that doing stuff when you’re not meant to is a tidy way to inject joy into life. At a purely pragmatic level doing things out of step with the masses is efficient. In the book Buy Ketchup In May And Fly At Noon, Marc Di Vincenzo makes the case for eating out at restaurants on Tuesdays (when other people don’t; Tuesday is better than Monday because produce often isn’t delivered on weekends). The best time to learn maths is after class and, says Di Vincenzo, buy tomato sauce after summer (prices go up before barbeque season).

But there are other benefits. I interviewed American author Gretchen Ruben a while back. She wrote The Happiness Project, a hugely popular and rather rigid guide for getting happy. After rattling off a number of rules, she places the qualifier: and every now and then do the opposite. So, don’t exercise in the morning, work on a Sunday, be totally cluttery for a day. Indian philosopher Guru Dev says the same, “Do the opposite of what you’d normally do”. Why? It injects freshness, and the jolt of going against the grain gets you to look at things differently.

Chris Guillebeau the crazy kid behind my favourite life-hack blog The Art of Non-Conforminity, says going against the grain enables you to live the life you want. “You’ve got to scare yourself a little to get change,” he says. He’s part of a movement worldwide that’s seeing people doing things the wrong way around. It’s a movement, I tell you!

One of the most popular wisdoms I’ve shared in the past is this: when things go to the blahs, sleep with your head at the other end of the bed. Simply waking up with a different view can realign your day differently.

Which is what Zen practitioners are alluding to when they speak of “fresh eyes”.

I read recently that business and creativity coaches have caught onto this concept and are calling it “vu déjà”.  Which is the inverse of seeing something in the same way. It’s seeing what you always see, but in a different way. Seen from a different angle, or a different time slot, things can seem like they’re being seen for the first time. Which is what eating lamb chops at 7.30am does.

So does having a bath at 10am on Saturday, which I did last weekend as an experiment to ricochet me from a listless rut.

And herein lies the real beauty of stepping out of (the time) line for me.It quashes Perfect Moment Syndrome, a term I think I made up when I worked in women’s magazines, mostly for the resulting acronym. PMS afflicts those of us who think life should operate a certain way. That birthdays are always happy, a week in Thailand is meant to be relaxing and a long-awaited date with your partner at a special restaurant will bring you closer together. When you shake things up, and do things from the inverse out, there is no such expectation. It’s so wrong it’s right.

Doing things at the wrong time…any that jolt you awake?