in defense of hipsters

In the Fairfax papers on the weekend there was yet another rant about why hipsters are so not cool. 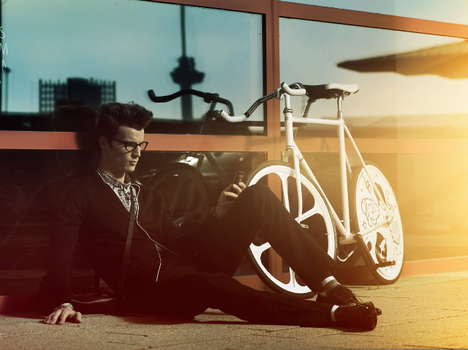 I find these rants intriguing …but they seem to read the cultural cues a little wrong. Through an old prism, somehow. So here I’m going to go into bat for these earnest, oddly cardiganed folk.

To confirm what a hipster is:

Hipsters covet lo-fi goods such as fixed-gear bikes and old-school Lomographic cameras. Their tastes run to 1950s furniture. They crave things that are obscure and typography-related. And they are disdainful of anything mainstream.

London’s Guardian describes a hipster, which historians say popped up in New York’s lower east side in 1999 as “squatting somewhere between MGMT, The Inbetweeners and Derek Zoolander [ouch!] … this modern incarnation is all mouth and skinny trousers”. And ipads, and second-hand shopping and cardigans and hanging in obscure coffee shops and having slashie careers (T-shirt designer/cafe owner/web design business etc).

You get the picture. (And I should confess that I certainly don a few hipsterisms: the black Buddy Holly glasses. The single-speed bike. Which is not why I feel compelled to defend hipsters.)

The thing is, critics bag out the affectations as being all about irony. And therefore flaccid. American writer David Foster Wallace called irony the “new junta”. “Irony tyrannises us. Postmodern irony and cynicism’s become an end in itself, a measure of hip sophistication and literary savvy. Few artists dare to try to talk about ways of working towards redeeming what’s wrong, because they’ll look sentimental and naive to weary ironists.”

“Real rebels, as far as I can see, risk disapproval … the new rebels might be artists willing to risk the yawn, the rolled eyes, the cool smile, the nudged ribs, the parody of the gifted ironists, the ‘Oh, how banal’.

1. I don’t actually think the bulk of young hipsters (in particular) are being intentionally ironic.

Irony has a bitter taste to it. It’s cynical. Hipsters I meet are actually far from cynical. They’re largely exceedingly optimistic and open. It’s not like when Gen X raped and pillaged the 70s for our toe-gazing, acerbic Reality Bites aesthetic in the 90s…we WERE miserable and cynical. We had no jobs. We grew up in the Thatcher era. And during the up-and-up of capitalism. So we reacted by dissing everything with sarcasm and irony and picking Nike logos off our sweatshirts. Hipsters aren’t really taking the piss. They truly like their Remington typewriter they picked up at a Brooklyn flea market.

2. By contrast Gen Y/Gen Z hipsters are not reactionary or negative

There’s a website called Stuff Hipsters Hate that suggests they hate deadlines and LOL cats…but I don’t know that they do HATE stuff. And they’re bagged for this, too. For not caring about anything.

I see instead a generation who grew up with so many competing messages, so much anger and reaction and gender role confusion around them…they got smart and decided to mark out a smooth…yes, beige…path for themselves. My 20-year-old brother is like this. He looks at his old brothers and sisters getting worked up about everything and calmly weaves his own way through the mire, unruffled.

Yes, they’ve had it easy, too. Full employment, technological enablement etc. But they haven’t turned into suit-n-tie consuming twats…they could’ve…

I wrote about this in a previous Sunday Life column…where a bunch of 22-year-old boys taught me how it’s “cool to be calm“.

3. Hipster values ain’t all that bad

It’s about simplicity and minimalism coveting second-hand stuff, re-using things. It’s not flagrantly ANTI-capitalistic (cos are hipsters anti anything!?). But it’s far more about organic substances and real things and about slowing stuff down…

The aesthetic is about being appreciative of things that have been made with care and consideration, like beautiful bikes and hand-crafted fonts. Not to take the piss or because they can’t think of anything new themselves, but because they appreciate things that were done well…in contrast to the mass-produced gunk they grew up around.

Hipster culture cherry-picks the best of the new and the old.

Of course,  not all hipsters are Gen Yers or Gen Zers…but they set the tone of the aesthetic. Gen Xers co-opted.

You know what, the bottom line is this: hipsters live a pretty nice life. They create the nice lives. They hang out in coffee shops and grow their beards long and create things on nice Macs. They don’t feel a need to don a suit and work 15 hours a day in an office. They also seem to have a better knack of navigating their way through the new way things are done – fast, chaotically, with multiple plates spinning in the air, and with uncertainty, uncertainty, uncertainty. Hipsters are less attached to outcomes…and they keep a bunch of plates spinning at once…while reaching back and enjoying a bike saddle crafted in 1950 or a belt hand-tooled in Arizona. Or whatever. They get the balance right, often.

Of course, there are hipster moments that are just cringe-worthy. And I don’t love the sleeve tatts. Or the bush ranger beards so much. What do you think? Hate hipsters much? Or somehow envious of they way they live?