The scary truth behind my cosmetics... and why I've ditched foundation

Sunday Life: This week I detox my cosmetics 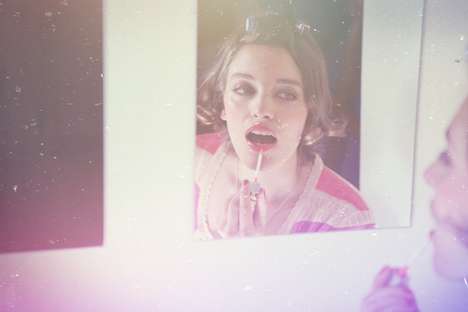 a little note: in my next post I will be listing the safe products I’ve decided to use as result of this week’s experiment, as well as those used personally by the top experts in safe cosmetics around the world. Check in tomorrow!

In 2009 Rick Smith & Bruce Lourie, two Canadian environmentalists locked themselves in an unventilated apartment and polluted themselves with household items like hand sanitiser and antiperspirant, which saw their triclosan levels rocket, and tinned tuna, which led to mercury poisoning after just seven serves. They offered themselves up as guinea pigs and emerged with a bestseller, Slow Death by Rubber Duck, their toxic tales influencing the Canadian government to ban BPA from baby’s bottles.

This week I share with you a similar experiment. This time I’m the intrepid guinea pig and my poison of choice is beauty products. My aim is this: to find out whether my makeup is making me sick. And what I should be using instead.

In January I finished filming my new TV show Eat Yourself Sexy (screening on Lifestyle YOU in August). For four months I was doused in a Molotov cocktail of makeup and hair products, reapplied dozens of times a day. We’re talking industrial strength stuff – superglue sprays and spac-filler foundation. I was a veritable Petri dish ripe for some Frankenstein-ian testing.

So out of  concerned curiosity I got a bunch of toxin tests done when filming finished. The most telling and accessible was the Hair Tissue Mineral Analysis which revealed worryingly high mercury, lead, aluminium and copper levels and a bismuth reading off the scale.

I got my Hair Tissue Mineral Analysis done through Interclinical. Naturapaths, doctors and nutritionists can organise this for you. It involved sending off a hair sample. A week or so later it came back with a VERY comprehensive report.

Now, granted, there’s no way of knowing where exactly these toxins came from – we’re exposed to thousands a day; babies are now born “pre-polluted” with 240 chemicals in their blood. But let’s take bismuth. I was able to eliminate most known sources (I’m not exposed to mirror silvering or wart treatments). The only viable source was foundation. Ditto copper. Red-based hair dyes and makeup stood out as the most likely sources going by the report’s list.

But here’s the thing. Beauty products are such a soup of suspect ingredients that eliminating one foul player is nigh impossible. According to the US Environmental Working Group women use an average of 12 personal care products before they leave the house, ingesting 168 toxins. Men consume 85 toxins before their morning latte.

Here’s the other thing. The chemicals used in beauty products are not regulated, despite our skin being the most permeable organ in the body (indeed it’s speculated it’s safer to eat your body cream than to wear it; our guts contain enzymes to break down the chemicals). You can slap a product that makes me glow green in the dark with the label “natural” or “organic” if you like. No one will stop you. (Although anything with the “Australian Certified Organic” sticker guarantees it’s 95 per cent so).

To be more involved in the way cosmetics are regulated in Australia get involved with the National Toxics Network. They’re currently working with the regulator NICNAS to better regulate things. They also helped to get BPA phased out in baby bottles here.

Almost 90 per cent of ingredients used in personal care products have not been tested for human safety and well publicised nasties such as phthalates (an industrial chemical that causes reproductive issues and birth defects) can be – and is mostly – disguised in the ingredients list as “fragrance”. Indeed, companies aren’t even required to list all their ingredients. Which might leave you throwing your hands in the (nano-particle tainted) air. What the hell are we meant to do?

Should we all become bubble people? I don’t think so. It’s not possible. It’s a matter of lessening harm as much as possible.

This week’s experiment has actually been my longest – I’ve been seeking answers to these questions for five months and consulted experts world-wide. This is what I did:

* I gradually used up old products (chucking stuff out is plain wrong) and replaced with toxin-free versions (not all of it, but prioritising stuff that stays on the skin).

* What to buy? I consulted the EWG’s cosmetics database which ranks 65,000 products and use the Good Guide iphone app (it reads barcodes and gives a rating).

* A rule of thumb: no parabens or words containing, “PEGS”, “eth” (eg sodium laureth sulfate ) or “amines” (these are also written up in the ingredients list as MEA, DEA, TEA etc). For a list of toxic ingredients that you can tick off against your product go here.

Then I “detoxed”. First off antiperspirant. It took three weeks for my pores to “unclog” and adjust to the natural deodorant.

I was talked through a shampoo “unclog” by Narelle Chenery who started Miessence, an Australian cosmetics company that the EWG rate in their top five safest cosmetic brands. It was also the first cosmetics company in the world to be certified organic by the food standards bodies in 2001. Now they’d be one of a few dozen only that pass this stringent test.

It wasn’t pretty – it involved stripping my hair of the caked-up silicone from standard shampoo with cider vinegar and bicarb and walking around with greasy, dank hair for four weeks as my natural oils were able to emerge from the blocked follicles. I’m now able to shampoo half as often. And I use a salt spray (from the ocean) to style it.

Which is the easiest tip to remember:

Dilute the Motolov cocktail! I use products with one ingredient where possible (rosehip oil as a moisturiser) and I’ve halved my regime. Simpler, cleaner, shinier.

As I say, I’ll be posting a list of toxin-free products tomorrow. In the meantime, does this stuff worry you? Have you done similar tests? Learned anything?