some Happiness & It's Causes reflections

I think I mentioned, I chaired the Happiness & It’s Causes Conference in Brisbane on Friday. I know a few of you were there. It really was very special…Big minds, big hearts, grappling with all the stuff that counts. Lots of stuff on using our minds for good, chimps and peace (ergo the cute-as pic below). 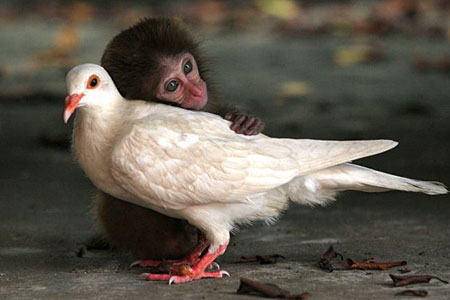 There were a few highlights…things that got me thinking.

Matthieu Ricard (the man known as The Happiest Man in The World) sat with me in the Green Room, leant over and said, “I find this idea of ‘creativity’ weird”. How so? “There’s no Tibetan word for creativity…it’s a peculiar Western obsession.” He didn’t say too much more on this. Basically, he was saying that it’s odd that we separate creativity from the act of giving. I guess it is funny that we have this need to…to think we must delineate our creations, rather than just offer them. This came up again in Robert Biswas-Diener (dubbed The Indiana Jones of Happiness). He pointed out that people in poor communities in Africa were just as happy as us. Despite the poverty and lack of “life-bettering” resources. This is because the standards to which they have to adhere to be accepted are narrower. For example, beadwork is important in headdresses etc. But the standard of beadwork is much the same. No one has to strive to have exceptional beadwork. And so they accept themselves more. I call it my teacup saucer theory: if you have a smaller saucer you can fill it to the brim more successfully. And feel whole.

Alan Wallace (one of the brightest men I’ve encountered) chatted to me backstage before he went on to discuss meditation and happiness. He had been listening to Natasha Mitchell from ABC Radio and I talking about getting old. He pointed out in Tibet it’s a good thing to look older. Women boast about their grey hair…and that much of their happiness stems from being wiser. Can you imagine? If we didn’t have to fight the signs of aging? And we could be proud of them? What a different platform to start your day from!

His Holiness the Dalai Lama raised this several times – both in my interview with him on Wednesday, and in his forum on Friday that I chaired. He banged on a lot about altruism. It was very much the theme of the conference. He told me on camera the secret to happiness is to be altruistic. It’s the easiest, fastest way, he said.

But unlike many of the experts, and in spite of what we might all think he’d say, he doesn’t think we can simply mediate our way to it. He reckons it’s about using our minds. When we’re acutely aware of the benefits of altruism then we can steer ourselves that way. To this end, he says, secular ethics is required for us to be truly altruistic. We need to be trained, he said. And from this I took it (based on our chats from the Wednesday) that

meditation can take us too inward.

I tend to agree. And I think we in the West can get too obsessed by this idea of shutting down the mind to go inside. Instead says HH, we need functional, structural training (schooling, religion, church) to

ensure we extend our energy outwards…to others… with the Dalai Lama on Wednesday

One of the highlights of the conference was the screening of the new film Happy! by Roko Belic. It touches on this idea that happiness is 50% determined by genes, 10% is determined by life circumstances (income, marital status etc) and 40% is determined by “other stuff”. What other stuff? Well, what we choose to make of our lives. This is entirely liberating. This stuff is free things: our passions, the flow from surfing, connecting with family and friends etc.

Roko is touring the film – Sydney, Melbourne and Brisbane – over the next week or two. See it if you can see it. I saw it last night here in Byron. I cried. It’s seriously a wake-up call. A happy one.

Now I’m off to sit at the beach and write my Sunday Life column on all this. So feel free to share your thoughts?!