To be nostalgic about an era you have to have been fondly engaged in it first time around. Which is why I’m not very nostalgic. I was largely absent from most eras I traversed. We only had one TV channel for much of my childhood, didn’t live near shops and my parents had a thing for down-scaling to the “Australian-made”, wholemeal, unpackaged version of…everything. So I never wore anything fluorescent, didn’t watch Molly die and don’t know the words to “Girls on Film”.

I also never owned a doll, except for a Barbie Hairtastic Styling Head my uncle’s ex-wife gave me (the one where you cut her hair – but don’t worry Mum! – a simple tug and more emerges from her latex skull). I gave my new Head a mud bath in the dam that very Christmas day, which clogged her follicles.

So my brother fashioned her a Mohawk. And that was that.

I wasn’t girly, so, by rights when I say “this week I’m twee” I’m really only observing from a distance, for “twee” is but a nostalgic romp back to sweetness’n’lite, Holly-Hobby-tea-parties-and-needlepoint girliness. To be twee is to wear cute floral rompers with a T-shirt emblazoned with kittens (bought on Etsy.com). It’s to squee! at the idea of an afternoon tea. And to collect retro eggcups that you then “instagram” and put on Tumbler. One twee blogger listed what it takes to be twee:

#10 Spend hours creating a mixed tape for someone special.

And, if I’m to go by the photos in magazines like Frankie (the Twee bible and one of the only magazine in the country to experience consistent growth in the past few years) it seems to involve standing slightly pigeon-toed. Like we did when we were three.

I learned this week that twee, another term for “indie-pop” and a baby-talk take on the word “sweet”, emerged in the early 90s in retaliation to the aggression of punk. Which is interesting. As I’ve wandered Newtown and Northcote of late, I’ve wondered why it’s resurfaced now? Why girliness and sweetness? What is everyone retaliating? (And WHAT IS IT with forest animals!?).

On Monday I chatted with editor of social comment site The Enthusiast Mel Campbell who’s railed against twee and this style of “contrived quirky” before. She reckons it’s a self-indulgent regression :“Twenty and thirty-somethings realise adulthood is quite ordinary and want to go back to the awe of being a kid, when things – and you – were actually interesting.” And she cites interest in coming of age books and films as evidence. 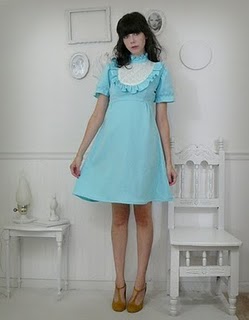 Some cranky commentators say twee is “reverse striving” and anti-feminist because it sees grown women play a passive, demure and, you could argue, awkwardly silly role.

But, viewed from another angle, perhaps it really is a life-bettering and culture-enhancing retaliation, this time to the shitty model of girldom and the anti- “femininity” of the past few decades. Being a girl today means going to “come as your favourite Kardashian” 12-year-old birthday parties, while feminine qualities, such as patience and gentleness, have been deemed as unhelpful for such pursuits as Getting Ahead and Making Important Points.

I did engage in some girly things as a kid.  I loved flower-pressing and embroidering bookmarks for friends when they won colouring-in competitions. And mini-afternoon tea parties with teapots of cordial were fun. Says Campbell: “Girliness was about taking a lot of time to do things and making things special.” A mixed tape, with a personalised decorated cover took days to make (I hear). And thus it was infinitely more special than being handed a USB stick of tunes.

And herein lies the worth of twee. This reverence of gentle process and mindful specialness, of studious stillness and appreciating pretty things is what has been lost, and what really ought to be explored and reclaimed. And not just for girls. So what if it’s a “trend” and sees people slavishly take to floral apron collecting.

To this end, I’ve just pulled out a copy of Catcher in the Rye and I’ve inserted two pansies in the spine, which I might just Perkins-paste to a card to a special someone soon. I just wont be doing so while listening to Belle and Sebastian or wearing anything in a liberty print.

Do you get twee? Hate on it? Or really rather like the regression?? It fascinates me…especially some of the mannerisms and cutesy voices I hear. You?

You might also like…
would you want to "see" into your future, even if it was bad? September 25, 2011 sunday life