why the paleo diet works

This week in Sunday Life I eat like a caveman 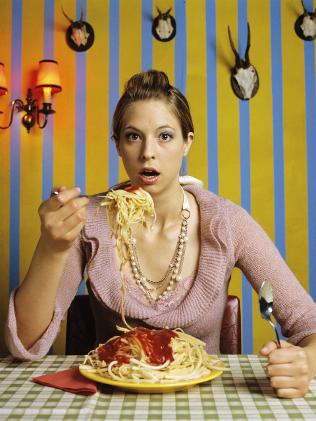 Of all the self-imposed guinea pig antics I’ve subjected myself to for this column, this week’s might be regarded as my bravest. For it entailed eating, oh-glory-be-yes, fat.

In a fat-fearful world, my no holds barred consumption of chicken skin, the crackling and the 3cm of subcutaneous tissue on my pork belly, several teaspoons of butter on my veggies, whole cups of full cream milk, chunks of ghee and avocado each day has freaked the innards out of most in my culinary orbit. And yet (boldly! fearlessly!) I’ve persevered with this particular experiment for three whole months.

Turn to the person to your left, and the one to your right. I’m betting one of you is making friends with your egg yolks right now, having picked up on what’s been dubbed the “paleo” or “caveman” diet. Images of loin clothes and bone gnawing aside, the diet boils down to something pretty innocuous: not eating anything fiddled with.

So, no grains, no additives, no sugar, no grain-fed meat, no mucked-around-with fat-reduced dairy.

And instead the unadulterated foods of our ice-age forebears. The subsequent claim is that doing so makes us healthier, thinner and live longer, a claim I had to test for myself.

For the bulk of our 2.6 million years on the planet our diet consisted of fat, meat and fibrous vegetables. Put simply, fat determined our survival. Ten thousand short years ago we started eating grains, gradually changing from fat-burning creatures to sugar and starch-burning ones. Which would be fine. Except our bodies have never adjusted – 99.9 per cent of our genes are the same as our caveman ancestors.

Grains by nature contain toxins in their husks (their only defense in the evolutionary chain) that we struggle to digest (ergo, bloating, gluten sensitivity, etc). Further, a grain-based diet signals “famine” to our primitive bodies – why else would we be resorting to the most energy inefficient, toxic food possible? Which is said to set off a domino of “coping mechanisms”, such as insulin, cholesterol and triglyceride spikes, as our bodies try to deal with a substance it has not evolved to ingest. The spiraling consequences of living grain-based lives is extensive, and backed by a fast-growing number of studies that show it’s making us fat and sick.

Now. I know, I know. All this turns the pyramid and the way you eat your cornflakes on its head. And it makes people angry. What do you mean we’ve been eating all wrong? We’re not meant to eat fat! Really? Who says?

On Saturday night I found myself at dinner with a bunch of paleos – two dentists, two farmers, a GP, some academics and the pin-up girl of paleo Nora Gedgaudas (at 50, she’s as toned and glowy as a young bride) whose authoritative and hyper-referenced tome Primal Body Primal Mind was my first introduction to the topic.

[Listen to my earlier podcast with Nora here.]

We ate the fish or the duck, poured oil over our asparagus and said no to the bread. We all drilled Gedgaudus, in Australia to speak at a series of Nourishing Australia conferences, on the guff all paleos tend to get drilled on. But didn’t cavemen only live to 30 – how can their diet be good? That was the average age, skewed by high infant mortality and death-by-charging-rhino, not diet. But don’t we need carbs for energy? No, it’s in fact the only food molecule that’s unnecessary for survival. Geez, all that saturated fat – it causes heart disease and high cholesterol! Again, no. The original study in the 1950s by scientist Ancel Keys that claimed as such was seriously flawed.

[To watch a video that explains this, click here.]

Since then studies have shown in just two weeks a saturated fat/paleo diet reduced cholesterol and triglycerides 30 points (equivalent to taking statins for six months).

My cholesterol dropped and I lost 2 kilos “going paleo”. But the most remarkable benefit has been its stickability. Once I’d escaped my sugar rollercoaster of yore and started eating 2-3 meals a day (fat satiates and so I now eat less) it just didn’t occur to me to “relapse” (carbs are addictive, so without them my cravings disappeared). Indeed, everyone around the table on Saturday had been grain-free for years, effortlessly. Which, to me, makes this whole caper less a diet and simply, innocuously, something that just makes sense.

This is a massive topic to cover in one column. I’ll be writing more about it in weeks to come, so feel free to post any questions or suggestions on the whole paleo thing below. I’ll also post a directory of doctors, dentists, farmers etc who support this way of living.

I know some of you might find it a little contentious…share! It’s a good discussion to have.

You might also like…
wheat free! sugar free! Take-to-Christmas treats December 6, 2011 i quit sugar, what i eat