Are the nutritionists lying to us? (a podcast, plus five *more* copies of Big Fat Lies to giveaway)

Last week I chatted to David Gillespie about some of the food myths he debunks in his new book Big Fat Lies. Today we have a quick chat about why the “lies” continue. I reckon you’ll like this one.

It’s easy to conclude from what David exposes in his book and in the podcast that there is a conspiracy going on. I prefer – and so does David – to be more moderate and get informed as to why the bodgy science got off the ground in the first place. And how it then formed the basis of most nutritional thinking in the Western world – everything from our food pyramid to taglines in infomercials.

It’s almost comical. But understandable. The world wanted answers when rates of heart disease suddenly soared in the 1950s. A President had a heart attack. All that was available at the time was a silly study on rabbits from 30 years earlier that everyone had dismissed at the time as proving nothing of any worth.

But everyone latched on to the faulty science.  The lies kind of domino-ed from there.

David is careful to say “ignorance” and commercial reality is to blame. Perhaps. But a breakfast cereal company selling us sugary flakes with clever marketing is only one part of the problem.

The bigger problem, to my mind, is that some of the peak nutritional bodies here and in other parts of the Western world, and many of the doctors, “experts” and nutritionists who we trust to tell us the truth, are often actively peddling these lies – and in the face of conflicting evidence. What’s more…

Some of the more vocal and influential nutritionists are paid by breakfast cereal companies and the like.

And many of the peak bodies are funded by major soft drink and junk food companies.

I won’t draw conclusions for you. I’m not saying such funding (which is often necessary for some of these organisations to survive) results directly in vested outcomes. But it’s good to know the full picture, right? Sadly, we’re rarely given it.

Anyway. You make up your own mind…

While you’re listening, you may like to check out these links. They highlight the various multinational sugar-based and low-fat companies that fund the major nutritional bodies in Australia and the US. As I say, make up your own mind…

And here’s the original column from the Daily Mail on how much sugar there is in breakfast cereals. A quote from the article that I found pertinent: “It would take a very brave government to pick a fight with the corporations that have built such lucrative businesses on the back of our addiction to sugar.”

As I’ve commented before, there’s not going to be a major campaign any time soon to get us off sugar. It’s just not going to happen. We have to take the responsibility on ourselves.

Someone on twitter also sent me this one – a rundown of how PepsiCo do their spin, including this: “Hiring respected public health experts and medical doctors to represent the company, creating an illusion of having a health-oriented mission, instead of being driven by profit.” Sigh…

Since so many of you were so excited about David’s new book ‘Big Fat Lies: How the Diet Industry is Making You Sick, Fat & Poor’ last week, I managed to secure another five to giveaway. To be in the running, please post an engaging comment below… 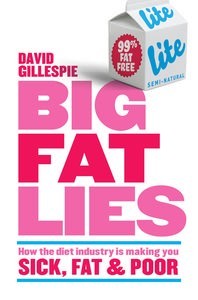 What are your thoughts?

You might also like…
six big fat myths about fat: a podcast with David Gillespie (plus I'm giving away 5 copies of his new book!) March 2, 2012 lifestyle