do what you're not doing

There’s a long story behind how I came across this poem, written by a second grader*. Social media…it’s a curious thing. The poem, however, is just so perfect and a Thing to Reflect On. 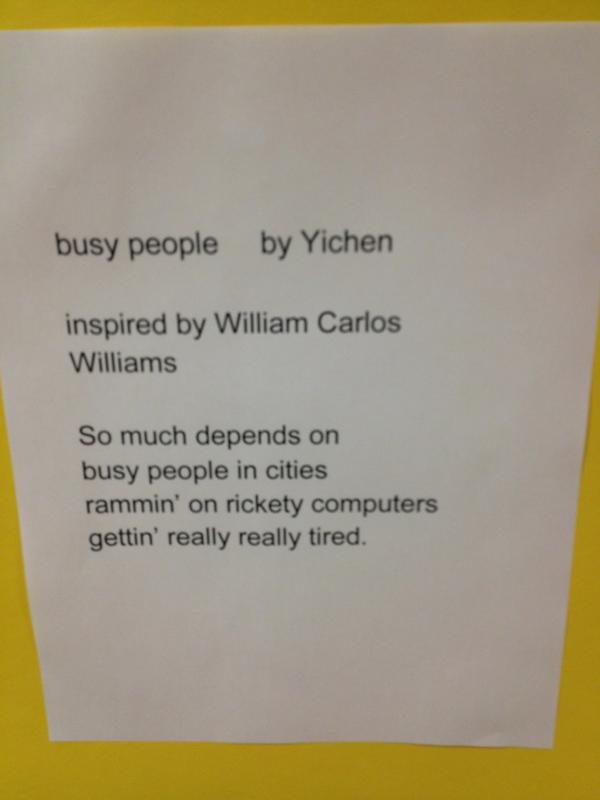 So much depends on

I was walking through the city last week, between a few appointments in and around lunch hour, and I felt the weariness of the people upon which life depends. It most certainly is the ricketiness of the computers… and the buzzy hum of the air conditioning and the frenzied anger of the cars that tires us. It grates at us. And, when we tire, we ram even harder. Pushing and pressing. That’s what we do in cities; we falter, we try harder.

For an alien, or a kid, it must look like insanity. Who was it that said the definition of insanity is doing the same thing over and over and expecting a different result? Einstein? Yes, I think so.

When we get tired, we have to pull back and ask if we’re rammin’. If we’re being insane. I have to do it all the time. I ram so much that my whole body crunches forward and I do my neck in so that I can ram no more…then I’m forced to rest up a bit.

There are different ways to do things. Always.

Tim my meditation teacher tells the story of the original meditation guru Swami Brahmananda Saraswati (from five thousand years ago) who called together his people one day to make an announcement. Hundreds of thousands would travel days to hear one of his edicts. They sat in the heat, awaiting the wisdom. The guru arrived and said, simply:”Nirvatatvam”. Which translates to:

“Do what you’re not doing”.

If you don’t like the result, stop rammin’ and try something else.

Head to the bush on Saturday for a walk.

Walk around the block when you’re creatively stuck.

Admit you’re wrong in a fight, no qualifications.

Sleep at the other end of the bed.

You get my drift…yes? PS What second grader is “inspired by William Carlos Williams”?!? Impressed.

* Jo’s friend Nick retweeted it…he found it on “a tweet by Kieran Healy.  an Associate Professor in Sociology at Duke University…

….via a RT by Roseanne Cash, who is a rad musician (and, by the by, the daughter of Johnny Cash)”. So there you go. Thank you Jo and Nick!

PS. no info sharing, no spam, promise.
You might also like…
how to make your decision the "right decision" (a lesson I learned at Cosmopolitan magazine) November 15, 2012 i share my tips