so you think your takeaway coffee cup is recyclable. It ain’t.

I’ve banged on before about why you should give up your takeaway coffee cup habit highlighting the fact the BPA in the lids is poisoning you. Of course, there is also the environmental aspect, which has bothered me for years. But I didn’t have the data on it all. Now I do. Perfect timing. I’ve recently been going a bit spare that loved ones around me (and most of the world) just don’t get the Take Your Own Cup message. 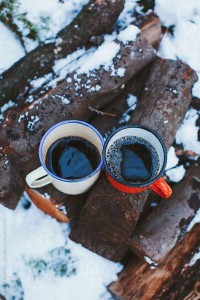 It turns out, disposable takeaway coffee cups are not recyclable.

ABC’s 7:30 Report on Wednesday night exposed a bunch of factoids that provide me with some extra ammo. Click on the link to catch up on it.

Most of the planet thinks the cups are recyclable. They’re not…

…because the cups are lined with plastic which is not biodegradable. This plastic sticks around long enough to out-live us. Disposable DOES NOT mean recyclable.

Here’s the bit that should shock:

Takeaway coffee cups are the second biggest contributor to waste after plastic bottles.

That’s because Australians use approximately 1 billion disposable coffee cups a year. The stats would be comparable in other Western countries, I’m sure.

This equates to around 60,000 kilograms of plastic waste per annum.

The plastic that doesn’t make it to the landfills ends up in the environment, aka our oceans and the stomachs of our fishy friends, where

Enough said. No more excuses. Sit in and drink your coffee (hey, get a bit mindful). Take your own cup.