I wrote about giving this week. So, then, the very committed Julie Cowdroy, an activist and academic and ambassador for Opportunity International Australia and the Global Poverty Project alerted me to a post she’s just put up ABC’s The Drum about how to give goats for Christmas. 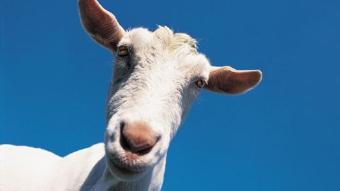 Or, more to the point, how to give a charity gift, instead of something consumerable. She kindly offered to provide a bit of a guide to the gifting charities she rates… handy for any of you out there who Just Can’t Face Buying Crap In A Mall this Christmas. Or Have Left Shopping To The Last Minute. Or who Want to Care More.

1. OPPORTUNITY INTERNATIONAL AUSTRALIA
Buffaloan: $50
Help sustain the source of livelihood for a poor entrepreneur in India by investing in the buffaloan. For just $50, you can feed this valuable creature for a month, keeping a buffalo full, healthy and ready to produce the milk that provides a regular income for a number of the rural poor in India.

Peas on Earth: $96
This gift helps entrepreneurs in Indonesia plough through poverty, allowing them to start a small vegetable farm – be it cabbage or carrots, beans or broccoli. Once it’s harvest season, they can collect their crop and sell the fresh produce at their own market stall for a profit, using the money to provide the basics for their families. Makes you wonder about money not growing on trees…

2. CHARITY WATER
Water Project in a Village: $5,000
A $5,000 well will mean that 250 people will have access to clean water. It’s the holidays. There’s no better time to thank your employees, vendors or customers for working with you. Honor them by sponsoring a water project. Once you do, we’ll direct you to our assets page so you can download printable or email-able cards to give to them. 100% of your gift is used to implement water projects in the field. For all the details on sponsoring a water project, click here.

3. ACTIONAID AUSTRALIA
Donate to the Burredo Seed Bank Project: Any amount
70% of the hungry are women. Despite growing more than 60% of food, women own less than 1% of land in poor countries. With ActionAid’s support the BUREDO Seed Bank was established. Instead of paying for the expensive seeds, the members ‘borrow’ seeds to plant. When they have a harvest they pay back the seed, with interest, so that the community seed bank continues to grow and benefit the whole community.

Leya from Uganda: “The seeds that we used to grow were useless – they gave us very low yields and we were always hungry. Then I was given two bags of improved groundnuts seeds and maize seeds. That first season I harvested seven bags of groundnuts and 27 bags of maize grains. I gave back double to BUREDO. I sold some groundnuts and bought two goats and my life really started changing. I hope that the ActionAid seed bank gets more funding so it helps other families.”

4. TEAR AUSTRALIA
Buy a goat: $50
Buy a goat and contribute to a long-term poverty-fighting project. Goats are a great source of nutritious meat, milk and cheese. With training, families can breed goats to pay for their children’s education and health care.

5. OXFAM AUSTRALIA
Batsiranai dolls: $29.95
For every one of these cute little Batsiranai dolls you buy a twin doll will be given to an HIV/AIDS affected family in Zimbabwe. There are twelve different dolls to choose from – boy dolls and girl dolls, all of them with names and all dressed in traditional African style. The Batsiranai dolls are exclusive to Oxfam Shop in Australia and the project has touched the hearts of customers across the country. Learn more about these great dolls and of course their twins in Zimbabwe

(republished from ABC’s The Drum)

Pictures of goats are popular at this time of year. Cards and e-cards featuring a photograph of a goat usually wearing sunglasses are in circulation representing the fact that somewhere, someone has received a goat, and someone else has received a picture of a goat.

The charity gifts trend is alive and well in Australia and many are jumping on board to purchase goats as well as a plethora of other gifts, spending anywhere from $5 to $10,000. One can choose to buy pencils, poo, piglets, or a taxi service in the Philippines for the world’s poorest people.

TEAR created the first charity gifts catalogue in 1994 while Oxfam launched its first Unwrapped campaign seven years ago, and many poverty driven NGOs have hightailed it to follow in their, er, hoovesteps. An environment of goodwill is a great way to stimulate some Christmas cha-ching for overseas development programs – in 2008, Oxfam alone raised $6 million, even at the height of the GFC – but it’s also what we as consumers want.

According to a 2005 report issued by the Australia Institute, 73 per cent of Australians would be happy to receive a charity gift, although, of course we would answer that way.

Still, a marketing manager of one organisation that only jumped on board the charity gifts bandwagon this year said that they decided to run a Christmas campaign because many of their donors were asking for it. Why? People are sick of buying crap at Christmas. They want something more ‘meaningful’.

Yet how meaningful are goats? There is nothing worse then getting something you don’t need – a universal truth that also applies to those who live below subsistence.

One of the first lessons that purchasers of such gifts learn is that it is not always clearly articulated that paying for a goat does not actually mean that a kid named Billy is bought and shipped off overseas. Often the money is collected and spent on projects and programs according to where an organisation decides the ‘most need’ is.

The method of delivery varies from group to group. For instance, every gift available for purchase at ChildFund Australia has been researched and the number of, say, piglets available for ‘sale’ is the number of piglets required for a particular community. You buy a piglet, a piglet shall be given. World Vision and Oxfam have broader categories. Buy a chicken and they’ll put the money towards their livelihood programs. Buy a bicycle ambulance or a hip-hop microphone and the money will go towards their education programs. Yes, one of the items you can buy is a hip-hop microphone. World to the Vision.

TEAR have a colour-coded system – red for education, green for agricultural and farming gifts, blue for health and so on. By placing gifts within categories as TEAR, World Vision, Oxfam and others do, the donor can see how their gift is a part of a broader development strategy.

Edward Fox, who was Oxfam’s Fundraising and Marketing Director until 2007, and is now the CEO of Opportunity International UK says, “When done well, the charity gifts proposition can improve the public’s understanding of the charity and increase the supporters’ affection for the cause. They can be fun and they are a light-hearted way to explain (unwrap) what the charity does.”

The desire to understand more about international development is evident in the many requests to organisations for donors to track specific gifts and get a photo of the actual gift being given. It seems to get on one’s goat not knowing who gets one’s goat. Some are bursting to know if someone will be bursting with gratitude to see the goat that they gave. NGOs do not generally offer this service.

However, a group called Charity:water has an aspect to their campaign called Proving It. Once a donor funds a project, local partners submit reports back to the group about the execution of the project. Charity:water then give donors photos as well as coordinates to plug into Google Maps so one can see the project they funded. A commemorative plaque is uploaded that recognises the donor and community who worked together to make the project possible.

People enjoy this. They want to feel connected to the receiver of the gift. However, it is a very fine line between wanting to know where one’s donation ends up and reinforcing the message that donors are the “Whites in Shining Armour”.

Goats at Christmas time provide the perfect opportunity to reflect on how we approach international aid and development. Archie Law, CEO of ActionAid says, “For the worlds billion hungry people who are marginalised and excluded from basic services, the daily struggle continues long after Christmas. When you buy that goat this Christmas maybe you can spend a moment thinking about what you can do in 2011 to contribute to the long-term changes needed to affect meaningful change in the lives of the most excluded.”

There are great projects and programs that poverty-driven NGOs are executing and donors should ensure they are savvy and do their homework to make sure the groups they channel money into have sustainable development strategies. True partnership with the worlds marginalised involves an understanding on our part of the role goats play in global development. And that shouldn’t get on anyone’s goat.

PS. no info sharing, no spam, promise.
You might also like…
how generous could you be? December 20, 2010 give a shit