A how to #voteclimate guide

First thing first. This is a climate election. No bones.

It is vital we #voteclimate. The UN has given us less than 12 years to change. The change must be dramatic. The change must happen now. The scale of the issue is so gargantuan that governments must do a complete overhaul of the systems and policies immediately if the change is going to play out by 2030 (i.e. we don’t wait until 2030 and expect something to dramatically happen). So we must vote in leaders who will really fire this thing up! With longterm vision! But now!

This being so, this guide steers you to vote for the best candidates using a climate lens only. Because nothing else matters IMO. Without a planet we won’t have jobs and growth. And I will add this – and it’s not mentioned enough – radical policies and innovation and infrastructure programs that are developed to save the planet (actually, to save us; the planet will live on) will produce way more jobs and growth in the medium-to-longterm. It makes sense from every angle to fight this…and to not give in.

I draw on a number of organisations also firmly committed to voting climate to arrive at the guidance that follows. We are all singing from the same song sheet, give or take. All of us are careful to base the guidance on the most current science, facts and policies. Please follow these folk. Support them. Fund them.

Finally, bear in mind my interest is totally vested. My priority is climate. I will also share how I arrived at my decision on who to vote for in my electorate – Wentworth, NSW – at the bottom. Mostly to illustrate how to do preferencing in marginal seats.

So. I’ll do this as a set of steps. Bear in mind, there is no black and white solution. It will involve engagement from you. Which is the point – we will not crack this mother*cker crisis until we all get woke and onboard. My motto is get woke, have hope and vote.

1. Go to this AEC link. You can check your electorate and practice voting. Ha! Fun!

2. Look up your local members’ policies online. You can find them here. Environment.vote (see below) has put links to all the parties environmental policies here, for much ease. And read the papers over the next week or so. Get woke. Don’t take my word for it all. Plus, frankly, it’s fun to know shit.

There’s also the ABC’s Vote Compass “quiz” you can do to find where your beliefs align on the party spectrum.

Plus the Fairfax newspapers have done a similar quiz – SmartVote. It was built in partnership with the Australian National University and is based on a Swiss model.

The ACF also has this one. It focuses fully on climate issues (the others cover off all issues).

All three really only direct you to a major party and don’t help with independents or referencing in your particular electorate. However, I think they are great tools for getting clear on what matters to you.

Once you’ve got clear on your view, and you need guidance on how to steer your vote, read on…

Voting in the House of Reps

This is the green form.

3. Vote the Liberals out. This is the main priority. The LNP is pro-Adani and their policies deny the science telling us we are in crisis. Their climate policy is Tony Abbott’s policy. Need I say more.

4. Vote for a Greens candidate or an independent who has joined this climate-committed crew. Put a “1” in their box. Don’t let the idea,  “but they probably won’t get in” put you off (except in some cases…see my example below). A primary vote will ensure that candidate gets funding. If you’re not sure you’ve got this right…

5. Check out Environment.Vote or GetUP’s Guide. Environment.vote  by Sara Rickards and her crew is brilliant. It covers all 150 electorates across Australia and focuses wholly on climate. (Sara is the Co-Founder of Futuregiving and Fuckgiving.) Both guides show you how to fill out the whole form (which you need to do at the poll on election day). This is super helpful if you’re in the dark re preferences. GetUp’s guide cover 29 electorates. They’ve focused on those electorates where we have a good chance of voting the anti-climate candidate out. They will be handing them out at these 29 polling booths on election day, too. They also have a scorecard where you can go through each candidates policies on (mostly) climate issues.

6. When filling out your preferences, you could follow the flyer that the candidate will no doubt shove in your face at the booth. The GetUp and Environment.Vote guides can help you in any case. In the main, I feel placing Labor after any Greens or climate-focused independents is the right way to go. Again, Operation Get Liberals Out. You also might like to check out this preferencing 101 video by Cath Blakey from the Illawarra Greens if you want to know how it works.

Note: Preferencing is REALLY REALLY important – if you do it wrong your vote could become exhausted, and your votes could go to someone you don’t want them to go to. In the House of Reps you must number ALL the boxes for your vote to count.

Voting in the Senate

This is more straightforward. It’s the white form. You can simply vote above the line. Again, make sure you number at least 6 parties above the line.

7. Vote Independents for Climate Action Now, ICAN, group Q, or the Greens. Again, you can go to the GetUp guide and see what they say for your state.  There is also this fabulous guide for the Senate based by Environment.Vote. It really makes the rundown very clear.

As Sara Rickards put it, “Their bad-assery led to the UK parliament declaring a climate emergency last week.”

How I will vote

In Wentworth, the contest is clearly between the LNP candidate Dave Sharma and independent Dr Kerryn Phelps, a member of the alliance of independents vowing to vote as a block on climate issues regardless of which major party gets in. In the event of a minority government, this is very powerful. Combining their power with the Greens will move things along.

In this specific electorate, we know the contest is likely to be between Sharma and Phelps as there was a bi-election at the end of last year. Phelps won by a little over 1000 votes. It’s perilous.

There is also a Green’s candidate in my electorate. So who do I vote for? Both are super strong on climate. But I go with Kerryn as a vote for her is very clearly a vote to keep the LNP (and coal and Tony Abbott’s climate policy) out.

Kerryn isn’t providing preferences. So I will vote 2 Greens and then 3 Labor. Which, it turns out, is what GetUp suggests. Remember, you must fill out all boxes with a number. 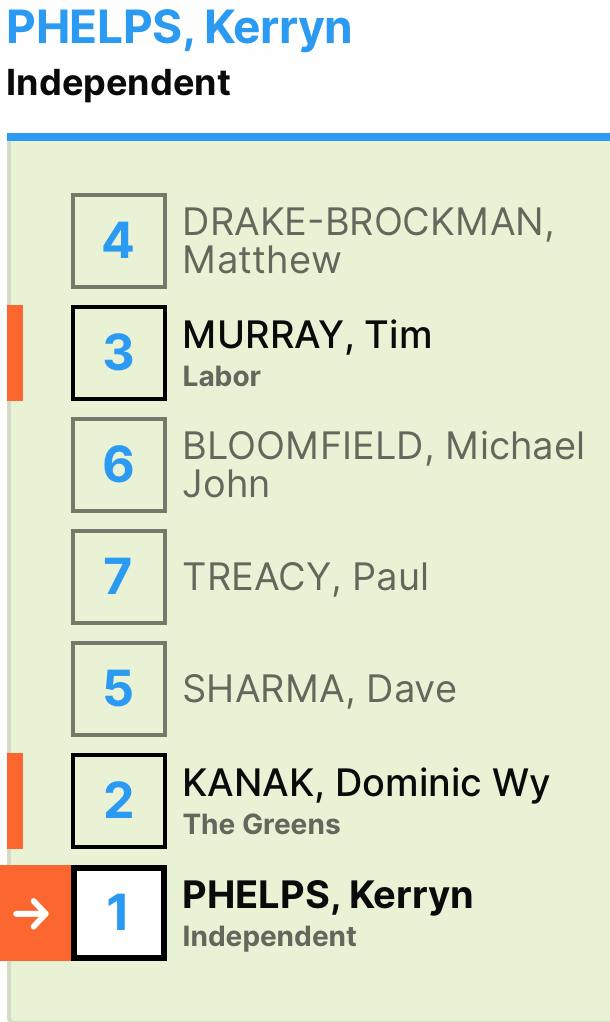 In the Senate I’ll go In the Senate, I’ll go Independents for Climate Action Now, ICAN, group Q. Greens second and Labor third. I vote ‘above the line’. 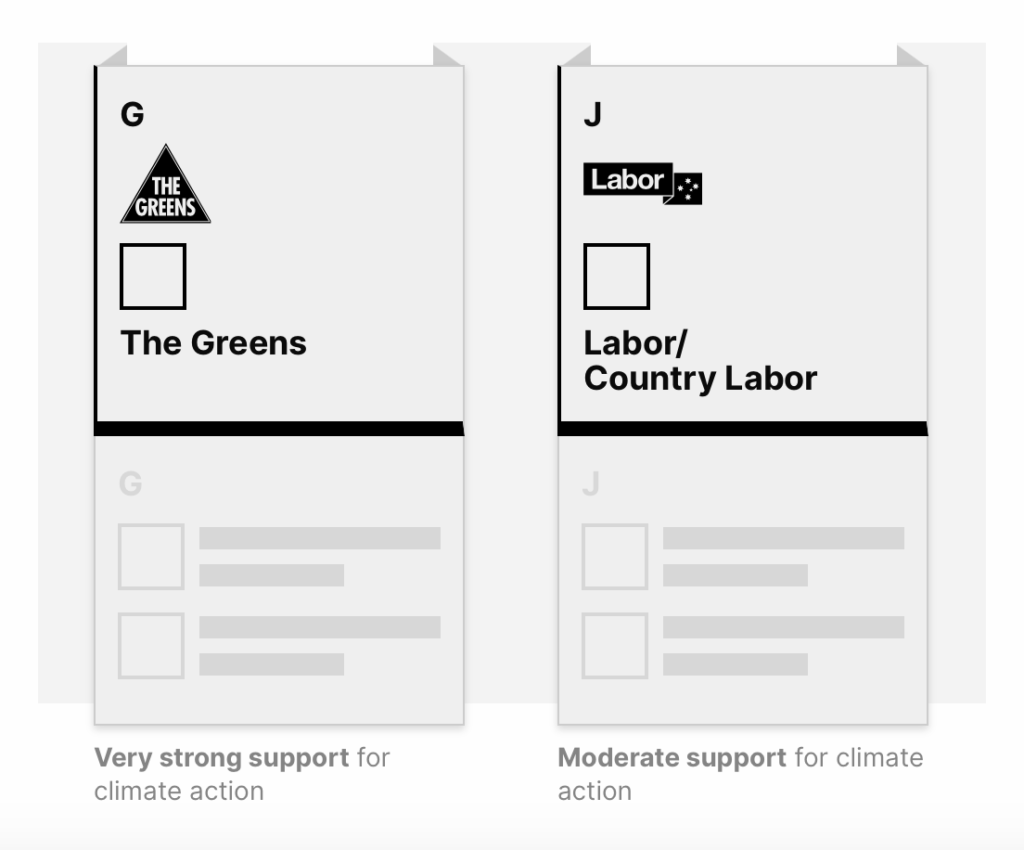 Right, kids. Over to you…The best we can hope for is a Labor Government with a strong crew of Greens and climate-focused candidates in both the Senate and in the House of Representatives. We can make it happen! It will be joyous when we do!

You might also like…
My next charity project: A merino wool throw (and a big dose of #giveashit) May 5, 2019 give a shit